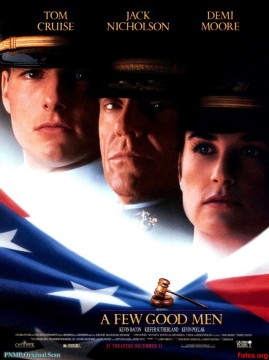 My idea of a perfect romance is what you see in the movie, ‘A Few Good Men’. If you have seen the movie you’d be wondering if I have lost it completely for the film doesn’t even have romance. Exactly. That is my idea of romance where you have two people whose lives are so entwined that they are absolutely incomplete without each other and yet they never speak of romance. Two people who are inseparable physically and emotionally not because they are always romancing but because they are on a mission together.

Another example of such romance is that between Agent Dana Scully and Fox Mulder in X Files.  Agent Scully and Mulder work together and they compliment and complete each other. Let’s talk about AFGM for the moment though.

A relationship which begins when girl boy meet for professional reasons and get close to each other as they spend a lot of time on the task they both are at. They don’t start seeing each other but they also don’t see other people simply because they are too engrossed in their work. Romance isn’t anywhere on their mind but their lives are closely knit that it’s only obvious for them to be a couple. Yet the romance stays under toned. The relationship for a greater part of it might even be platonic. Like both in X files and in A Few Good Men there is nothing to indicate a physical intimacy.

In ‘A few Good Men’ a Court-Martial of two Marines, Louden Downey and Harold Dawson accused of murdering a fellow marine William Santiago at the Guantanamo Bay Naval Base in Cuba is the backdrop of a perfect romance between the defense counsel and naval investigator involved in the court martial.

Tom cruise plays the young US Navy lawyer Lt.JG Daniel Kaffee. He comes across as a light hearted guy with an extremely casual approach towards life, hardly serious about his work and quite proud of and popular for his plea bargaining skills the reason why he has never really seen a real Court room. Some of the scenes later reveal that Kaffee’s apathy towards his profession is a lot because he has to constantly live under the gigantic shadow of his late father Lionel Kaffee who was known as the greatest trial lawyer of all times.

Demi Moore plays the Naval investigator LCDR JoAnne Galloway a young energetic no-nonsense Navy officer who takes her work very seriously and is a seeker of truth. She is also a lawyer herself so is quite aware of the legal inticracies. The first time she meets Kaffee, she seems visibly upset at his laid back attitude towards the case. Although she is of a higher rank than that of Kaffee, Kaffee being the lead defense counsel has his own style of working and he doesn’t allow JoAnne to mess with his style.

After Dawson and Downy were arrested JoAnne was appointed to investigate the case and though she wanted to defend Dawson and Downy herself the case was handed over to Kaffee. However, Kaffee remains answerable to JoAnne, as she says “My job is to make sure you do your job”

JoAnne is convinced Dawson and Downy are innocent and they merely followed orders of ‘code red’ (a certain form of ragging) given by superior officer which unfortunately led to the death of William due to his vulnerable medical condition. But Kaffee doesn’t really believes in this. He decides to go for a plea bargaining and avoid a defence procedure altogether. Understandably JoAnne and Kaffee have a lot of clash of opinions and they don’t seem very pleased at each other’s existence.

Kaffee doesn’t take the case too seriously and JoAnne considers recommending another counsel in his place. After JoAnne hands over case papers to Kaffee, he hardly studies them. He is more busy playing ‘softball’ while Dawson and Downy were in custody waiting for their counsel. JoAnne comes to see him and remind him of the appointment and this is the conversation they have:

Things change once Kaffee goes deeper in the case. We see JoAnne looking upto Kaffee for the talented lawyer that he is. Though she always maintains a straight and cold face, you know that deep inside she admires Kaffee for his talent. At times Kaffee loses confidence, he doesn’t want to take a few steps but she keps pushing him because she knows what he is capable of, she tells him that Dawson and Downy are going to end up owing their lives to him because he is the best defense lawyer they could get. Yet in none of these scenes will you see an overflow of love or emotion. Both Kaffee and JoAnne are controlled in displaying emotions. JoAnne is more controlled.

There is just one incidence where just the two of them, JoAnne and Kaffee spend time together in absence of their third team mate, Researcher LTJG Sam Weinberg (played by Kevin Pollock). Kaffee had asked both JoAnne and Sam to take a break from the preparation of the case and spend time with their family. In the next scene JoAnne knocks at Kaffee’s door and asks him if he’d join her for dinner. He says, “are you asking me out on a date?” She says “No.” And reccommends a good place for Sea food. The undertone of romance is just perfect in this scene. I simply get an amazing kick out of this kind of under-toned appreciation and respect and feelings two people have for each other.

Even at the dinner table they are seen discussing the court martial. As part of casual conversation JoAnne tells Kaffee about the past cases she has handled and he asks her,

“why are you always giving me your resume.”

“Because I want you to think I am a good lawyer”. She replies.

“I do.” Responds Kaffee.

JoAnne gives a pause and says “No, you don’t.“

Before Kaffee could respond or explain further she puts the focus on Kaffee by saying, “I think you are exceptional lawyer…“

The scene depicts the uncomfort that JoAnne probably felt at the probability of the conversation getting any more personal. Also, may be she didn’t intend to put Kaffee in a position where he had to praise JoAnne just to make her feel good. But it was obvious that she wanted to hold a place in Kaffee’s eyes as a smart lawyer and somehow get his approval to the secret crush she might be nurturing.

Throughout the Court-Martial JoAnne keeps providing the much needed moral support to Kaffee. She pushes him to test his own limits and he succeeds. They have their shares of fights and patch ups on matters related to the passion they were sharing, the quest for truth. Kaffee flips out, gets mad at JoAnne but eventually does what she suggested him to do, takes the risk of putting Col Jessup on the stands and charge him with the allegation of having ordered a ‘code red’. Yet, right before they enter the Court room that day when Col. Jessup was to be charged by Kaffee, JoAnne takes him aside for a minute and says, “Listen Danny, If you think you can’t get him to say it, don’t go for it. I’m special counsel for internal affairs, and I’m telling you, you could get in a lot of trouble.”

Could two people be anymore complimentary to each other than this. First she gives him the courage to go for it, then in her administrative capacity she cautions him of the consequences. The understanding is so perfect. JoAnne also knows Kaffee through and through. She knew Kaffee asked for the copy of a transfer order from Col. Jessup because he wanted to see his reaction. And although Kaffee vehemently denied it in front of JoAnne, it was this instinct of his that eventually led to the truth of the case.

Kaffee is also a very sarcastic person, he is often seen poking fun at JoAnne, pulling her legs for no reason. He responds bitterly and sarcastically to some of JoAnne’s over enthusiastic but genuine attempts at seeking the truth and snubs her. But in that one rare incident when she genuinely does make a mistake and Sam gets mad at her, we get to see the soft side of Kaffee defending JoAnne, he is kind and nice to JoAnne. At that moment you see the love and affection he has grown for her.

Could there be any more perfect love than this? Will two such people ever want to be with another person when they have everything they want in each other, a friend, a colleague, a boss, a metor, an icon? I think not. The love that grows over such hard times between two complicated professionals is the one that’s most beautiful of all.

11 thoughts on “A Few Good Men: The most perfect romance”