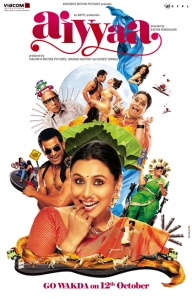 My readers would be happy to know that the writer’s block has been lifted. A lot of writing is coming out these days, some personal, some for the book ‘This Is My Truth‘ and some for this space, my blog. The book hasn’t found a publisher yet, but am writing it anyway. These days if your content is good you can self publish and it would sell. The obsession for the TV Show Ishti Kutum continues as the show has become even more interesting. The that I was writing on it is going good, it is going to be a very long one, you all need to have patience to read it.

So I heard Rani Mukherjee is back. I already knew for quite some time now, that she is appearing next to Aamir in Talaash but that there is another release, a light comedy this October came as a pleasant surprise. Pleasant because I always look forward to a Rani Mukherjee film. I miss her from Bollywood these days. At times I feel that just because she isn’t around, we are making good with a Vidya Balan. Not that I am underestimating Vidya Balan’s talents, but still, somehow she remains a shadow of Rani for me.

‘Aiyyaa’ that’s the name of the comedy releasing on October 12, 2012, produced by Anurag Kashyap along with Viacom 18 directed by Marathi film maker Sachin Kundalkar. Rani’s co-star is southern actor Prithviraj. This is his Bollywood debut.

There are several reasons I absolutely loved the trailer. Firstly, the subject of the film. A woman’s desire for man or men, her sexuality her feelings and attractions are some of my favorite subjects. I have earlier written about my disappointment with our popular culture which has little mention of woman’s carnal desire for a man/men. We don’t have enough depiction of thoughts and feelings a woman goes through when she sees a good looking, sexually attractive  man. We know when a man sees a beautiful woman, he sings songs like, Chaundvi ka chaand ho; yeh reshmi zulfe, chandan sa badan and such. But what does a woman think or feel?

To some extent, Aiyyaa showed me glimpses of that. The plot itself is quite a breakaway from the gender stereotypes. Its a story about a marriageable girl Meenakshi’s search for her kind of man. In the trailer we see that a matrimonial ad has been published by Meenakshi’s family which depicts her as young, shy and homely but as the scene opens up, we realize she’s none of those.

Then the central theme of the film is revealed when Meenakshi says, “Gore log nahi mujhe kaale log pasand hai”

Breakaway from middle class India’s obsession with the fair skin. Meenakshi desires the dark. A tall dark angry young man soon catches Meenakshi’s fancy and she is seen following him in a state of trance to men’s loo, libraries and whatever have you. She is seen turned on by his smell, and the sheer proximity of his body. She also bursts into absolutely crass typical south Indian style song and dance sequence expressing her sexual desire in rather raw bordering to vulgar words (the song Dreamum Wakeupum)

I loved every bit of the song ‘dreamum wakeupum’ and couldn’t help drawing a comparison with ‘Ooh la la ooh la la’ from Dirty Picture. As it turns out, you have to see dreamum wakeupum to truly understand what southern masala vulgarity actually is. Choreographed by Vaibhavi Merchant, you have an unapologetic Rani Mukherjee thumping her ‘thunderous thighs’ in manner most un-lady like, at one point she even air kisses the man’s ass, her dress and make ups are downright stupid and if you thought in spite of all that stupidity she still looked pretty and sweet, you are wrong.

The song dreamum wakeupum is just crass. There is no space for but in it. And that’s why its so authentic.

I read somewhere somebody speculating “would Rani be able to outshine Vidya’s oomph?” I thought that was a stupid speculation. Rani is the original. She sets the standards, others try to live up to it.

Happy to see that finally a comedy has ensued from a woman’s search for a suitable man. Looking forward to the movie which shouldn’t be disappointing from the look of it. I am keeping faith in Anurag Kashyap and Rani Mukherjee.