There is a new Airtel commercial on TV titled ‘Boss’. The ad shows that a woman and her husband both work at the same place where she is the boss. She gives some task to the husband and insists that it be finished within a tight deadline. He argues that it’s not possible but she asserts the he doesn’t have a choice, the task must be completed and shows him the door. Next thing we see is that she goes home cooks a nice dinner and video calls her husband, entices him with food and pleads him to come home soon. It turns out this is the same guy she was bossing around at work.

The feminists are upset about the fact that the ad perpetuates the stereotype that no matter what you do and how successful you are, you still cook for your husband. Cooking is the wife’s job. The other set of people are upset over the feminists being upset. Their argument is – why the feminists do nitpicking, why can’t they appreciate the ad for breaking gender stereotypes and showing the wife as the boss at work, there are so many other sexist ads on TV, why are feminists not outraging over them and instead targeting an ad that at least attempts to break some stereotype?

Yes, there are many sexist ads on TV and feminist theory criticizes them all. Not just ads, they look at the entire popular culture (films, television, theater, literature, music videos, computer games et all) with feminist glasses and criticize gender stereotypes and sexism whenever seen.

This ad might be getting a bit more criticism because it is built on the premise of breaking gender notions but it actually doesn’t. The opening sets a high level of expectation which is then not fulfilled rather frustrated by the way it ends and so the outrage.

Half way to gender equality

The commercial reflects the half-baked gender equality of our time derived from the half-baked understanding of gender norms. A section of young Indian women today are no longer bound by gender norms, they are bravely and confidently stepping out of the confines of four walls and entering the man’s world, taking up traditional men’s role and sometimes proving themselves to be even more successful than men.

But the men are not taking up traditional women roles.

As a society we have made progress to the point that we accept women in traditional men’s role, but not the vice versa. So we now have modern parents who’d say “I would raise my daughter as a son” but you’d never hear someone saying, “I’d raise my son as a daughter.” The aspiration is still to be the ‘son’ of the family. As if masculinity and being a man is a superior trait. So equality to the extent that women can do everything men do is great. But men doing what women traditionally do are not something we aspire for. So we may have more and more working women, but we still think stay at home husbands are a shameful lot living off their wife’s money.

(If a couple cannot afford to hire a full time nanny for their child, if they don’t have any help from family, and it becomes absolutely necessary that one of them must quit the job to stay at home and look after the kid, who do you think would quit? What if both earn equal, then who would quit?)

Modern Indian women’s aspiration is not to shed traditional gender roles but to acquire new un-gendered roles. So while women are working and perhaps taking higher position than their husbands, they are still cooking because that remains their domain and that is their expression of love and care.

To add to their confusion is the modern patriarchal narrative that puts pressure on working women to perform both gender roles and the new roles of their choice by inculcating in them a false glorified sense of being able to do multi-tasking and balancing professional and personal life. Images of woman with multiple hands à la Goddess Durga with mobile phone, laptop in one hand and cooking utensils, baby, baby products, books in other hands are often circulated through social networks to enforce this new gender construct – women are simply better at multi-tasking.

Modern Indian women aspire for this image and work hard to live up to this expectation. They try to perform both their professional duties and household chores with a sense of pride and achievement because they have been made to believe that only very special women can achieve this. 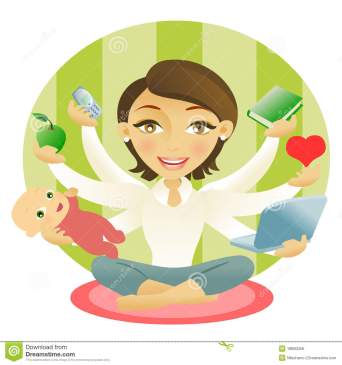 (Why in the history of humankind, men were never asked to aspire for this? Why they were never told that no matter how tired you are from work, you must come home and help with your wife in the kitchen or do the laundry or the dishes. If you don’t do that you are a bad husband. It doesn’t matter what you achieve in your work sphere, if you can’t cook well for your wife and handle your baby you are a bad father? Men don’t have the pressure to prove that they are good husband or father by cooking and cleaning, their worth is proven by their ability to provide. This mindset hasn’t changed much even though today women can also be the provider.)

This ability to balance it all is also how modern women are being judged as good mother, good wife. As Indra K. Nooyi, the CEO of PepsiCo worried,

“…if you ask our daughters, I’m not sure they will say that I’ve been a good mom. I’m not sure”

If you ask me, not every women need to worry about being a good mother. May be she can just give birth and leave the nurture, care and upbringing part to the man while she focusses on her work, particularly when she is the CEO of one of world’s biggest company.

But no, that is too much of radical men hating family breaking feminism we are talking about. Women must still do the care and nurture part because that’s how nature designed them. Nature made men women different to play different roles and any woman who neglects this natural duty is a bad mother. You might be the CEO but you are a bad mother.

(Ever met a woman, who hates doing household chores, is a terrible cook, and totally sucks at the care and nurture part and her husband, out of his own choice and love for wife does all the household chores and also handles the babies? What would such a woman be called?)

Alternative ending to the Airtel commercial

Could a woman’s love and care toward her husband be expressed by helping him at work? What if they showed that she goes home, works on her laptop and shares data/files/reports/presentation all via Airtel 3G and together meet the deadline? But we are not yet ready for that extreme level of gender de-construction are we? Back home women cook. Period.

Could Airtel alternatively sell their 3G video calling by showing that the women is wearing a sexy black dress and trying to entice her husband by sex instead of food? Would that be more regressive? Would that be objectification of women? Or would it be a welcome change that a women is being depicted as an active sexual being with her own demands that her husband must fulfil?