Abdul Gafoor Tufani is a Muslim man. He has come to Delhi with a mission.

Abdul comes from district Araria, a very backward region in Bihar. It is a largely rural Muslim dominated district with around 93 percent of its population living in villages and 50 percent of its population Muslim, in sharp contrast to the state average of 20 percent Muslim population in Bihar. The region is socially backward and lags behind in seven out of eight indicators as per government surveys. 92 percent of the district has no medical facilities of any kind, 20% have no formal schools, 597 villages of the 713 villages have no electricity and 50 percent of the villages do not have any all-weather accessible roads.

Abdul Gafoor grew up in this backward, Muslim dominated region, studied in a Madrassa, and learned a lot about Islam. “I have read Urdu newspaper all my life, I have done lot of research about Islam,” he said.

Abdul Gafoor thinks he has the solution to India’s terrorism problem. And it is with that plan that he came to Delhi on 4th May 2017 and have been since sitting in peaceful protest at Jantar Mantar  withstanding Delhi’s scorching heat through the day and night. He wanted to meet the Prime Minister to explain what he thinks should be done about terrorism. He couldn’t meet the PM but the Prime Minister’s Office accepted his appeal a copy of which, stamped by PMO, is in his possession and he proudly shows it to everybody.

“Terrorism is very wrong. Terrorism has no religion,” said Abdul on being asked why he is sitting in dharna. “Terrorists sport beard and skull cap and think they have become Muslim. They pick up guns, and kill our soldiers. I am a free man, a proud Indian, I have eaten the nation’s salt and so I am sitting in this 42 degree heat with this demand that Pakistan be pressurized into teaching real Islam to these terrorists,” he said.

“Take me to the terrorist and I would force them to drop their weapons. I am Muslim, I have learned Islam. They often resist state by saying, “These are Hindus” but I have got my training in a Madrassa, I am a namazi, my voice will have strength. I want to ask the terrorists, which book commands us to kill human?”

Abdul Gafoor is a poor man, makes his living doing tuitions, but he is hugely ambitious. He thinks he can awaken Pakistan, Modiji and the Muslims of India to join him in this mission to dissociate Islam from terrorism, to convince the terrorists that nowhere in Islam does it say go and kill people.

He is a lone walker in this mission impossible, there is no party or organization to support him. “In the afternoon I eat Khajoor (dates) and water  and I have dinner of Rs.30 in the nearby hotel. This is where I sleep, on this pavement twenty four hours. I did Shabbe barat here, inshallah Eid too I would celebrate here on this pavement.”

Abdul Gafoor has a wife and five children in the village. It is very well to leave them behind and travel all the way to Delhi for this mission, noble and impossible but how would they survive? “I have made all arrangements for them. I told my wife, if you run out of money, sell this item. Then sell that item. Never cry for me. Even if I die, I will die for my nation.”

He says he would sit in front of Jantar Mantar with his demands indefinitely. “I have jumped into this and there is no going back for me unless I have finished terrorism from its roots.” 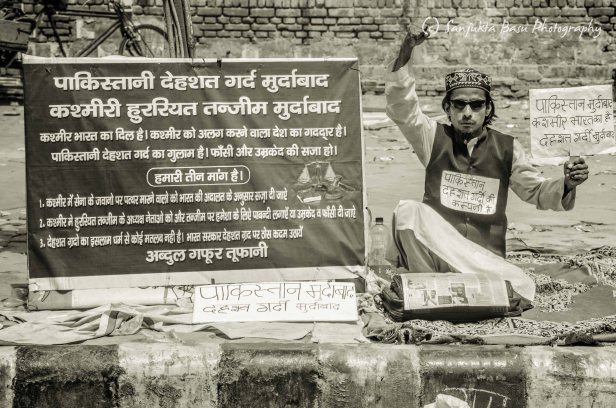