In 2011, I started the project Single Woman Budget Travel, a travel and photography research to find out how safe or unsafe it is for a solo woman to travel in India on a budget. As part of this, I traveled to many places (it is still ongoing project) gathering first hand information, and documenting  them through my photography.

As my interest grew in the subject, I have now decided to carry on with this topic in pure academic ways, also traveling to other cities and doing in-depth studies through first hand research. As part of that, I recently did a five city tour to the metro cities, Delhi, Mumbai, Kolkata, Chennai and Bangalore to document the relationship between gender and public space in each city. The result of this tour was published as a five part series on Firstpost titled, “Where Are The Women: An Examination of Gender And Public Space in India”

To elaborate, centuries of women’s movements have secured for women, the right to vote, right to education, right to participate in workforce and several other rights that enable them to come out of their kitchens and claim equal citizenship in public life. However, we have not addressed the question ‘who legitimately owns the public domain’, and the gender-based segregation of spaces as public(masculine) and private(feminine) has not been challenged. We encouraged and enabled our girls to step out of the kitchen, but didn’t inform and motivate the boys to step in.

The home and kitchen is still considered women’s primary domain and the world outside, men’s. Women are allowed to venture out in public space, but not really own it. As a result of this, young girls in Haryana continue to drop out because of the sexual harassment they face on their way to school, rape victims continue to be blamed for ‘inviting trouble’ for ‘being outside’ at a particular time.

Women are allowed access to public space only for legitimate purposes, and are expected to walk the straight line between home to their place of purpose. Women do not have the right to purposelessly loiter. The urban women seemingly have a better access to public space, with millions of women participating in workforce, commuting daily using public transport or going about their economic activities etc. Yet, if we observe urban spaces deeply, we realise that women have very limited access to public spaces.

In 2011, the seminal work Why Loiter? (Phadke, Ranade, Khan, 2011) attempted to bring a paradigm shift in how women could claim full citizenship. Based upon 3 years of research work the book argues that in order to maximise their access to public space, women do not need “greater surveillance or protectionism,” but rather “the right to engage in risk.” Only by claiming the “right to risk,” they argue, can women truly claim citizenship.

What is the ratio of women to men in a given open space? What activities are the women engaged in? What is their body language? Do women and men use the same space differently? Does women’s access to a public space depend on the time of the day? Does it vary according to caste, class and age of the woman? These are some of the questions this photo series will seek to answer.

The idea behind the series is not to provide anecdotal evidence for or against any hypothesis, but to trigger a thought in the audience’s mind; to inspire them to observe the public space around them more closely and find the answers themselves.

Part 1: Delhi: It is the men who largely occupy open spaces in Connaught Place

Part 2: Mumbai: Gender imbalance is an issue even in safe public spaces

Part 3: Kolkata: Women are almost everywhere, but never on their own

Part 5: Bengaluru: Of the two genders, only men loiter

I began with Delhi’s Connaught Place to see whether the most commercial and busy space in Delhi has equal participation of men and women. I found out it does not.

In Mumbai, I wanted to compare the findings of Delhi, so I picked up spaces parallel to Delhi’s Connaught Place, that is the Fort area and shot it both at night and day. I found out access to space by women and men change with sunrise and sunset. I also observed class factors.

In Kolkata I set out to see whether the common perception of Kolkata being a super safe city and Bengali women being equal in everything is true or not. I found out, it is partially true. Here too class factor was observed, working class women access spaces more than elite class.

In Chennai my main focus was to check out the Marina Beach, which was hailed as a safe space for women even at late night during the Jallikattu protests, I wanted to check whether it remains a safe space even when it was not a protest site. I found out that it is partly safe, as there were many people even till 9 to 10 in the night, but no solo women, or groups of women, only couples and families. Local people said for a solo women, late night at the beach is not safe. Still, in the five city tour Chennai happens to be the winner in terms of women accessing public spaces, though not leisure purpose, not at all for loitering. 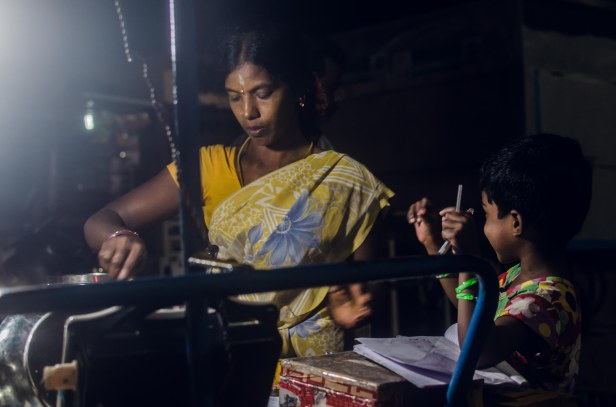 This photographic research would continue and I would cover more cities. Please do share your thoughts.